The Utah chapter of the Huntington’s Disease Society of America will be hosting its annual Team Hope Walk with a twist this year.

Due to the COVID-19 pandemic the organization is transitioning into a virtual format, welcoming people to walk wherever they would prefer for the fundraising event on Oct. 17.

According to the HDSA website, Huntington’s disease is a fatal genetic disorder causing the breakdown of cells in the brain as well as the deterioration of a person’s physical and mental abilities. There are currently 41,000 symptomatic Americans with more than 200,000 at risk of inheriting the disease.

For Morgan Pratt, the Utah chapter president, Huntington’s disease is something she has been dealing with throughout her life. Pratt’s mother passed away due to complications from the disease and Pratt was then diagnosed with it about two years ago at the age of 23.

For Pratt and the Utah chapter, the Team Hope Walk raised $40,000 last year in hail and inclement weather. This year Pratt said the goal is to raise $60,000 through the virtual event.

As a result of the COVID-19 pandemic, the organization’s fundraising efforts have taken a big hit and the same has been happening at the national level. Pratt said the national organization had to lay off half of its staff, but she added that the struggles have brought the Huntington’s disease community closer together.

“We all are quarantined and going through the same sad and depressing emotions, but when you go through hard times together your community grows stronger,” Pratt said.

At one virtual fundraiser Pratt attended recently, one of the women in attendance mentioned that it was the first time she had smiled in a month.

“That truly gave me the chills, that was so fun to connect with her, have fun and shake off those COVID blues,” Pratt said. “The Hope Walk is such a great time to see families and connect with everybody in the community. It’s a great time for us.”

Pratt also said that the organization is in dire need of donations right now as scientists work to find a cure for Huntington’s disease.

While putting together events and fundraisers, the Utah HDSA offers monthly support groups for those impacted by Huntington’s disease, and anyone can join.

While the diagnosis of Huntington’s disease is considered fatal, Pratt found that her diagnosis gave her a new outlook on life, something she feels lucky to have realized at the age of 23.

“I realized in that moment that

WASHINGTON (AP) — The Latest on the 2020 presidential election (all times local):

Kamala Harris’ chief of staff says the Democratic campaign is confident in the safety measures for Wednesday’s vice presidential debate.

But Karine Jean-Pierre also called it “shameful” that Vice President Mike Pence’s team objected to the use of a plexiglass barrier between the candidates. She noted that Pence heads the White House’s coronavirus task force and says he and his team should want more protection for him and people involved in the debate.

Her comments came during an interview Tuesday on CNN.

Harris and Pence will meet Wednesday night at the University of Utah for the only vice presidential debate.

Jean-Pierre says Harris is well-prepared to show viewers the contrast between President Donald Trump’s handling of the pandemic and how she and Joe Biden would approach it.

HERE’S WHAT YOU NEED TO KNOW ABOUT WHAT’S HAPPENING IN THE PRESIDENTIAL RACE:

President Donald Trump is recovering from the coronavirus at the White House. He announced Tuesday that he had instructed his aides to abandon COVID-19 relief talks with congressional Democrats until after the Nov. 3 election. Democrat Joe Biden campaigned in Gettysburg, Pennsylvania, on Tuesday.

— Trump, contagious at White House, back to downplaying virus

— 5 questions as Pence and Harris prepare for debate faceoff

HERE’S WHAT ELSE IS HAPPENING:

Democratic presidential candidate Joe Biden says he and President Donald Trump “shouldn’t have a debate” as long as the president remains positive for the coronavirus.

Biden said Tuesday that he’s “looking forward to being able to debate him” but said “we’re going to have to follow very strict guidelines.” He says he doesn’t know Trump’s status since the president returned to the White House after being hospitalized at Walter Reed National Military Medical Center for three days after a COVID-19 diagnosis.

Biden told reporters while boarding his plane back to Delaware in Hagerstown, Maryland: “I think if he still has COVID, then we shouldn’t have a debate.”

The next debate is scheduled for Oct. 15, with a third debate slated for Oct. 22.

Democratic presidential candidate Joe Biden says the U.S. doesn’t have to choose between “law and order” and racial justice.

Speaking near the national historic site in Gettysburg, Pennsylvania, on Tuesday, Biden cited “instances of excessive police force” and “heart-wrenching cases of racial injustice” that have inspired peaceful protests across the country. Biden says instances of violence and burning during some demonstrations “cannot be tolerated” but also should not obscure the larger issues.

President Donald Trump is campaigning as a “law and order” president and blasting racial justice protests as violent anarchy in U.S. cities led by Democrats. And the president has falsely accused Biden of calling to “defund the police” across the country.

The annual Making Strides walkathon, which is held every year during Breast Cancer Awareness Month, is more than just a walk. It is a movement supported by the largest network of breast cancer events in the nation. From bolstering innovative research, education and prevention to providing patient services such as free rides to chemotherapy, free places to stay near treatment and a live 24/7 cancer helpline, funds raised are put toward supporting patients, survivors, “thrivers” and caregivers throughout every step of their experience.

Determined not to let the COVID-19 pandemic delay progress in combatting this deadly disease, Making Strides Greater New Haven has been converted to a drive-thru event for 2020 that will commence at 10:30 a.m. on Oct. 18. Those interested in joining the Connex team during this drive, or who want to make a donation, can do so by visiting https://bit.ly/ConnexStrides (case sensitive).

“Our credit union is committed to continually driving real change in the surrounding communities we call home.” said Carl Casper, executive vice president and chief operating officer, Connex Credit Union. “As they say, ‘it takes a village’ and we hope that you can all join us in reaching our goal of collecting $1,000 and playing a part in ending breast cancer.”

According to the American Cancer Society, breast cancer is the second most common type of cancer found in women behind skin cancer. In 2020, it’s estimated that more than 279,000 new cases of invasive breast cancer will be diagnosed. You can learn more at cancer.org.

For more information on how to participate in Making Strides Greater New Haven, please contact Anita Annunziato at [email protected]

ConnexCares is Connex Credit Union’s charitable and philanthropic program. The mission through ConnexCares is to promote financial literacy, well-being and understanding to our members and the greater communities Connex serves.

One of Connecticut’s largest credit unions, Connex Credit Union is a full-service credit union serving more than 60,000 members at eight branches. Membership is open to anyone who lives, works, attends school or worships in New Haven, Hartford, Middlesex or Fairfield counties. For more information, please call 1-800-CR-UNION or visit connexcu.org.

This press release was produced by Connex Credit Union. The views expressed here are the author’s own.

END_OF_DOCUMENT_TOKEN_TO_BE_REPLACED 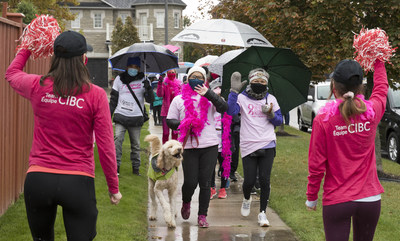 “While this year’s Run was virtual, the passion, commitment and resilience shown by Team CIBC, our partners at the Canadian Cancer Society and Canadians across the country remained as strong as ever,” says Laura Dottori-Attanasio, CIBC’s Group Head, Personal and Business Banking and Executive Run Sponsor. “When we unite around a shared purpose, great things happen. I am proud of Team CIBC for finding creative, virtual ways to keep the Run spirit alive and to help ensure no Canadian has to face cancer alone.”

This year’s Run was reimagined to include both virtual and in-person elements, where participants had the opportunity to build virtual runners through a refreshed mobile app, and tune into live-streamed opening ceremonies before heading out into their neighbourhoods for a physically distanced walk or run. The live-stream was hosted by award-winning singer-songwriter Jully Black, and brought participants across Canada together at the same time for the first time in the Run’s history. It also featured performances from talented Canadian musicians, testimonials from people affected by breast cancer and a high-energy warm-up featuring fitness leaders from across the country.

Although many aspects of the Run changed this year, what didn’t change is the importance of the fundraising effort. In a recent poll*, 85% of Canadians say they believe it’s important to continue supporting cancer-specific research during the pandemic.

In addition to supporting breast cancer research, CIBC’s support of the Run will also extend to CancerConnection.ca, the Canadian Cancer Society’s online support community for people with cancer and caregivers. The program works to provide emotional support and practical advice about managing cancer while building wellness and resilience. CIBC is proud to support this program at a time when connecting with others online is more important than ever.

“Despite this being a different year, and different Run for all of us, we could not be more proud of the way Canadians rallied and continued to support the breast cancer cause,” says Andrea Seale, CEO, Canadian Cancer Society. “We know from recent research that the pandemic has impacted the ability to donate for one-third of Canadians*, but together with CIBC’s support, we’re able to bring CancerConnection.ca, to people with cancer and caregivers at a time when they may be feeling particularly isolated and alone. For 24 years we have walked and run together with CIBC and despite the impacts of COVID-19, this year was no different.”

As title sponsor of the Canadian Cancer Society CIBC Run for the Cure for 24 years, Team CIBC has raised more than $56 million for breast cancer research, treatment, education and support programs. United together by One for Change, Team CIBC supports its communities year-round through fundraising, donations and

The love of dogs has taken on a new meaning for Lauren and Dave Clark, owners of DesiLu Photography.

Not only is the company named after the couple’s dogs, Desi and Lucy, but the pair have partnered with Forsyth Humane Society (FHS) to photograph dogs that are up for adoption after their experience fostering a senior pet.

“Our relationship with Forsyth Humane Society started with us becoming fosters about two years ago,” says Lauren. “We brought home this gorgeous dog that looked a lot like our dog, Desi. Knowing that black dogs are harder to photograph and get adopted, we decided to take her over to our studio to take some pictures of her and sent them over to FHS.”

From there the partnership was born.

Lauren and Dave photograph the pets once or twice a month, helping FHS work toward their goal of increasing the save rate in the community. After each session, the photos are placed on the adoptable pet’s online profile, as well as shared on their social media channels. The photos have also been used on the FHS website and in marketing campaigns.

“Every like, share, and comment helps these pets get seen and hopefully adopted,” Lauren says. “Our hope is that these photos will catch people’s eye enough for them to pause and take a look at these animals that need our help.”