Finance Minister Avigdor Liberman on Sunday said the government should amend the controversial 2018 nation-state law, which enshrined Israel as a Jewish state, due to what he called its “contradictions.

Liberman was addressing the recently released identity of Lt. Col. Mahmoud Kheir el-Din, 41, an Israeli special forces officer who was killed in a covert operation in the Gaza Strip in November 2018.

Kheir el-Din, a member of the Druze community, joined the Israeli military in 1999 and served in the Paratroopers Brigade for three years before joining the Military Intelligence’s Special Operations Division, where he served until his death.

In 2009, he established a nonprofit aimed at helping advance the Druze community in Israel and was a vocal advocate of youth leadership in his community.

Kheir el-Din was described by Prime Minister Naftali Bennett as an “Israeli hero.”

“There is a clear contradiction between the nation-state law in its current form and the praise given to Lt. Col. Mahmoud Kheir el-Din,” Liberman said in a tweet.

“We have an opportunity to fix the nation-state law and formalize the Declaration of Independence as a Basic Law,” he argued, calling on the opposition and coalition to reevaluate the contested law and “to do what’s necessary rather than settling for words like ‘brothers in arms’ in regard to the Druze community.”

The law has drawn criticism for discriminating against minorities and especially against Druze citizens, many of whom serve in senior positions in the Israeli military and other state agencies.

He made the ultimate sacrifice for the sake of Israel during a top-secret mission in Gaza. He defended the State of Israel shoulder to shoulder with his Jewish brothers and sisters pic.twitter.com/lRbkx1fjA2

Liberman has voiced opposition to the law before.

Last year, he said in an interview with Channel 12 that the law should not have been enacted and should be amended to reflect “word for word” the 1948 Israeli Declaration of Independence, applying the value of “equality” to Israel’s Basic Laws.

Quasi-constitutional Basic Laws serve as Israel’s constitution and guide the country’s legal system. They are usually more difficult to repeal in a legislative process than regular laws.

In 2017, as the law was being discussed, Liberman argued it could compromise the standing and rights of Israel’s non-Jewish minorities and turn Israel into a theocracy.

However, despite his apparent vocal opposition to the law, Liberman did not try to prevent it from passing during the legislative process, with his Yisrael Beytenu party eventually supporting it.

The nation-state law passed in 2018 defines Israel as the nation-state of the Jewish people. Its present form was opposed by Israel’s Druze and other Arab minorities, who insisted it effectively defined them as “second-class citizens.”

Activists wave copies of the Declaration of Independence during a special session about the nation-state law at the Knesset on August 8, 2018. (Yonatan Sindel/Flash90)

A series of petitions filed by a variety of groups against the law to the High Court of Justice, including by the Meretz and the Joint List parties, were rejected by the court last year, as an expanded panel of 11 justices ruled that the law did not conflict with Israel’s democratic character and can stand as a quasi-constitutional Basic Law.

Ten of the justices wrote that “although it would have been better if the principle of equality had been explicitly enshrined in the Basic Law,” its omission “ultimately does not detract from its status and importance as a fundamental principle in our doctrine.” 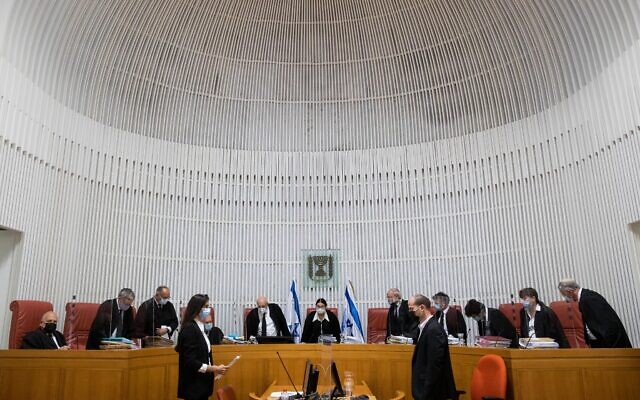 Supreme Court President Esther Hayut and justices arrive to hear petitions against the Jewish Nation-State Law, at the Supreme Court in Jerusalem on December 22, 2020. (Yonatan Sindel/Flash90)

Supporters of the law have said it places Israel’s Jewish values and democratic values on equal footing. Critics have long argued that the law contravenes the basis of Israel’s legal system, as well as its Declaration of Independence, and solidifies inequality among its citizens.

Former president Reuven Rivlin, despite his mostly ceremonial role, issued stark criticism of the law after its passing, arguing it was “bad for the State of Israel and bad for the Jews.” He argued at the time that the law was “part of a broader trend, a global one perhaps, that seeks to silence the debate.”

Amy Spiro contributed to this report.

We’re really pleased that you’ve read X Times of Israel articles in the past month.

That’s why we started the Times of Israel ten years ago – to provide discerning readers like you with must-read coverage of Israel and the Jewish world.

So now we have a request. Unlike other news outlets, we haven’t put up a paywall. But as the journalism we do is costly, we invite readers for whom The Times of Israel has become important to help support our work by joining The Times of Israel Community.

For as little as $6 a month you can help support our quality journalism while enjoying The Times of Israel AD-FREE, as well as accessing exclusive content available only to Times of Israel Community members.

Thank you,
David Horovitz, Founding Editor of The Times of Israel

Already a member? Sign in to stop seeing this